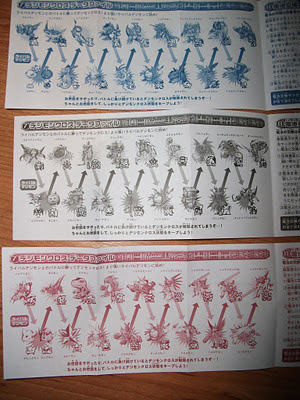 What is this shit? This is fucking stupid. I don't care who the fuck you are, War Greymon doesn't fucking digivolve in Seadramon. That's just stupid.

I love the parallel of the megazords and super organisms (see, because it's multiple multicellular organisms working as one organism... get it? It's cool, dammit), but you can't make that mesh with traditional digivolution.

Like, lets say the original five dinozords are like the champion level, and the megazord is an ultimate/perfect. Okay, cool, makes sense. Because the Dragonzord is about equal to the megazord, it would ALSO be an ultimate, right? Fair enough. And when you have the Dragonzord combine with the other 5 dinozords, you get one that sacrifices speed for power. So, it's still really an ultimate. So the Dragonzord is an ultimate that, because of the technicalities of megazords, digivolves into another ultimate. I can understand that, and it makes perfect sense, especially if you then say Titanus is another ultimate, and the Ultrazord is a mega/ultimate.

But instead of working like that, what the xros minis do is mix in digimon whose level we don't know (or they technically don't have one, ala Ohakadamon or Apocalymon, although Shoutmon is pretty obviously a champion at this point) with older digimon, such as Agumon and Triceramon, who we already know everything about.

That's just the analogy. The reality is that if you xros any of the champion leveled digimon Greymon, Seadramon, Tyrannomon, or Monochromon, or either of the ultimate leveled Metal Greymon or Triceramon, or even the mega level War Greymon or Imperialdramon with the also mega level Magnadramon, the result is the rookie level Dracomon.

This is why the xros minis are stupid.

But more than that, the way that you xros is to beat an A.I. digimon in battle, and what species you kill will determine what the resulting xros will be. So... if you can get a War Greymon by killing ONE enemy, and all of the digimon you can obtain are equal in power anyways... what's the fucking point of even playing it? If you aren't raising your digimon to get a specific one... why ARE you raising it? Wouldn't it be simpler just to let the stupid fucker die?

Or, better yet, just never buy one to begin with? I certainly think so.

I fucking hate these xros minis, dude, I'm serious. I can't wait until like G10 or whatever when the xros thing is old hat and digimon do something that makes more sense. Maybe there will be a mass extinction and only the "metal" digimon will survive or something. Whatever, damn.

This is the dorkiest thing I have ever written...
Posted by Princess Malyssa at 21:14