I know this may shock some, but I've done some research, and, it turns out, Sonic isn't the only thing on the internet. Gasp in disbelief if you want, but that doesn't change facts, and the facts say that if you search for something you want to see, you will see THAT, and not, you know, Sonic being gay and also anthropomorphized and/or eating a pokemans. True story.

What sort of "research" did I do? Well, a short while ago I was digging through some files on this laptop when I found this: 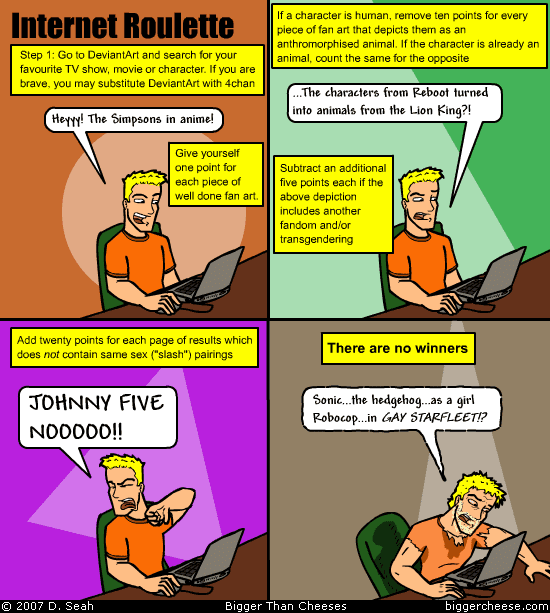 haha... clever observation. Everything is homogenous! If only it were funny.

So, I played this game. But, in order to make it fair, I've decided that there are, in fact, winners, and after a certain point I wanted to know WHEN that was. Last time I tried this I got to 51 points before being bored, but I was aiming for 100.

So here are the revised rules:

1. Just like the original, pick ANY movie, tv show, or character. It specifically asks for your favorite one. Playing this more than once, you might think to even the odds by picking NOT Sonic. But if you're looking for a challenge, you could also pick Sonic.

2. 1 point for well done fan art. This is supposed to set up that good fan art represents a small an unimportant fraction of the majority of stuff you'll find, as the point value is small comparatively. Actually, it's the other way around in real life, where good fan art is so omnipresent that you can't count too much for it or you'll win 2 pages sooner.

3. This is where the original rules get fuzzy. It's supposed to be if you see a "human as an animal." Well folks, humans ARE animals. So, in order to have this make sense and preserve the original, possibly ignorantly stated intent, the new rule is -10 points for a character that wasn't human turned into one, or vice versa.

4. This one was originally subtract an additional 5 points if a work from rule #3 also contained a crossover or a transgendered character. Because this fellow doesn't seem to know how to speak English, I have to fucking translate for his fucking retarded ass: If you see an image that is a crossover lose 5 points. If you see the character with a gender that they didn't have originally, like, if the character was already a tomboy but is shown to be way more feminine, that's another -5. Rules #3 and #4 are cumulative.

5. The most controversial rule. It seems like this should be something like "minus something point for same sex pairing," but instead it ends up being the key to winning the game. So, if you come across a page that DOESN'T have your character gettin' gay, then it's 20 points. So, just to reiterate: automatic 20 points every page.

See, because I like Godzilla, I'm immune to this game. Turns out that's not a joke or anything. You really need to have MUCH crazier fans than the faggots who actually like Zilla to qualify for the joke. However, the rules say I can pick anyone, so whatever. 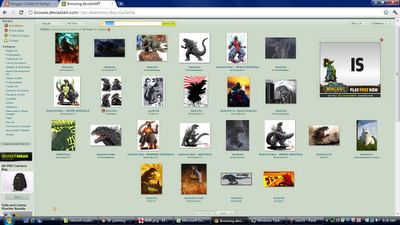 Zoomed out. Here you can see that not only are G-fans NOT as crazy as Sonic fans, but a lot of them are great artists. +20

Also, NEW RULE #7: This should go without saying, but, if it ISN'T a picture of your character, it doesn't count towards your total. You will see a lot of Zilla, Space Godzilla, and Mechagodzilla, so that needs to be said. 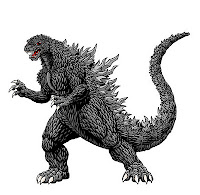 http://kaijuverse.deviantart.com/art/Godzilla-63921450?q=boost%3Apopular%20Godzilla&qo=3
Frank Parr, I believe. For those of you breaking the rules, because Frank Parr is the best, this is worth 100 points. But, for me, +1.

http://kaijusamurai.deviantart.com/art/Godzilla-Neo-SUPER-GODZILLA-139271511?q=boost%3Apopular%20Godzilla&qo=6 Matt Frank's Neo shit. This is super godzilla. I'm not giving myself points for this darker and edgier "LOOK HOW MANY SPIKES" 90's comic book bullshit. Please, stick to the comic book covers Matt. This crap is sickening. *gets off of soap box.* 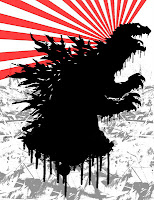 Note: no, I'm not giving points for that Godzilla Neo shit. It's waaaaay too over the top.

http://sedani.deviantart.com/art/GODZILLA-43722546?q=boost%3Apopular%20Godzilla&qo=12 ...why is he green? You've never SEEN Godzilla before, have you, sedani? 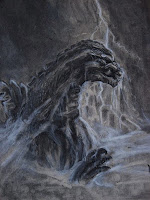 http://cheungchungtat.deviantart.com/art/Godzilla-01-185275549?q=boost%3Apopular%20Godzilla&qo=18 It's easy to ignore the Michael Bay vibes when you realize that Godzilla HAS FUCKING WINGS!!! :D +1

http://ron-guyatt.deviantart.com/art/Godzilla-207339397?q=boost%3Apopular%20Godzilla&qo=20 Looks like the "Godzilla 3D" marquette. Oh wait... I guess I have to specify the one from the 80's. Love that racist lettering. No points for this crap.

http://gojigirl.deviantart.com/art/Godzilla-s-hell-76291899?q=boost%3Apopular%20Godzilla&qo=21 not only is this NOT a Godzilla/Doom crossover, but it's just a photoshop using Bob Eggleton's stuff. This isn't very good at all...

Will there be a next time? Probably. I'm cutting this up mostly to make it not just one long blog and also to make it more like an LP.
Posted by Princess Malyssa at 09:06