And The Award Goes Too...

Now this is just silly. I stumbled onto some website that was run by this film nut who kinda does the same thing I do (see: any post I've ever made here, they're all ranting monstrosities), only he watches people movies too. No big deal, but it does mean that it opens a guy like that up to bitching about the oscars as if they meant something (unlike me, since I learned immediately that Godzilla movies didn't show up on their radar, which I thought was complete bullshit at the age of... I don't know, seven or something, and disregarded any authority it claimed to have right then and there, and haven't changed my opinion since), and all the heartaches that follow with that.

Here you will find the article where he goes through and chooses his own ponies. First off, I don't understand what the prize is. A little statue of some guy? Who cares? It's gold... I think, is that it? Don't all these hollywood jack-offs already have a bunch of money? And it has to be money that makes gold valuable, because it sure as hell isn't pretty or useful for anything (other than a conductor, but any damn metal can do that). The praise or bragging rights? No one respects "the academy," as I have illustrated myself and with that link which clearly indicates even people who give a shit about hollywood, people movies disagree with pretty much every decision they've made. I just don't understand why they still have these giant circle jerks when the only parts of the lord of the rings-esque run time worth watching is the very beginning where they usually have a pretty funny guy do a skit before the whole show starts to die in a baroque cacophony of gaudy ivory tower masquerade pretentious "we ARE movies" bullshit extravaganza-thonic pointless high-fiving fucktards.

Whatever. I got to reading this and I thought "well wait a minute, this guy thinks HE'S critical of this crap? Ain't no way somebody who cares enough to debate the awards as if they were important can out-cynic someone who... doesn't." And with a magic pothole, I found myself with all the material I needed to have my own "YOU-GOT-IT-WRONG-ASSHOLES!!!" awards. I'll call them, the "avacodies" after my random picture I pulled out, the rare and priceless avocado colored TamaGothi, which do not physically exist in our dimension, so all I have is this picture:

I would have made white transparent and inserted a little gif of a Murphygothi or something, but I don't have that on me and I kinda just pulled this out of my ass like just right the fuck now. I didn't want it to end this way, you know.
So there it is. Now, on with the awards!


"Visual Effects" is a politically correct way of referring to cgi, but when I first heard the term I thought it meant, you know, actual effects. The nominees were Star Trek, Disctric 9, and Avatar, which won. Now, there isn't much to say here because all cgi looks the same and it all looks like shit and will never get better despite the decades of hollywood jack-offs convincing themselves that they aren't watching a pile of badly composited donkey shit dance across the scene at impossible angles with a bizarre motion that makes stop motion look downright perfect, but Avatar was in 3D, and that's cool. In fact, all movies that aren't in 3D should lose automatically.

Granted, Avatar has SO MUCH cgi that it looks more like a 90's full motion video adventure game than a real movie, whereas the other look like modern video games with slightly less fake looking actors, but, again, it IS in 3D, and that's one step above in "visual effects" terms.


Nominees were Hurt Locker, some other movie, some other crap, Avatar again, and a bunch of movies I've never seen or heard of. Of the ones I have seen, Avatar's compositing effects are good in a 90's video game hauntology sort of way, which I just said, but that isn't really editing. As in, the editor doesn't do that. Also, Avatar already has one avocadie, so it's done. NO ONE WINS.


Where the special effects would go if there were any movies with special effects. The nominees were Star Trek, and two other movies that are probably made up. Star Trek HAS no special effects, only "visual" effects, so it doesn't win. But, since this was the 2010 awards, which covers movies from 2009, and the absolute best effects from any movie from 2009 was hands down Gehara (Raiga can suck it, and you're all thinking it, so shut up). Gehara was just the fucking bomb. Recently the rash of indie films filling the void left by Godzilla, Gamera, and everyone else in the late aughts (including Clover, who died in the womb) has made the whole "look" of the time be not that of genuine hauntology, but of a low budget Full Moon video or Ultraman episode that tries to make fun of it's budget, but still makes you cringe; but not because of the handywork involved, the sets and props and suits are gorgeous, but the shoddy compositing looks worse than that infamous shore scene from G2K. That said, Guilala (who is, after all, one of the big four G's, and is officially one of the big boys) has some Ariel Pink-like precision with it's hauntology scenes. I SWEAR TO GOD I watched those scenes over and over and COULD NOT believe they were recreated and not stock footage. It's still hard for me to tell which movie certain clips come from (I mean, on youtube and stuff).


Documentaries aren't art. NO ONE WINS.

The only DRAWN cartoon left in the lot is, wouldn't you know it, the last real disney movie, the one with the frog and the racism... probably not specific enough, but you know, it's the LAST ONE. Now, I know I should give it to the shoe in, but Up, a pixar joint, won the award. It's time I accept the western world's continued rebuttal against the much, much worse japanese cartoons and gave credit where credit is due.

Avatar has got to get this one. Now, I know there are some actors in it, but didn't Roger Rabbit do that too? And Space Jam? We shouldn't ignore a cartoon simply because it has a few non-smurfs, we should embrace the spirit of the work, which is clearly that of a cartoon, rather than force some role upon it which it doesn't rightly deserve. However, it shouldn't have both, so I exempt it's earlier award in favor of this.

For Best Visual Effects, NO ONE WINS.


Nominees are: Up, Avatar (what the fuck, again? That's it, you're disqualified from nominations), Hurt Locker, Sherlock Holmes, Something about a fox.

So furries are just plain vile, and I'm incredibly pissed off at the person who told me about those things, as I DID NOT need to know there were actual, real life people who lusted after cartoon smoldering cheetah temptresses. More to the point, these people should be exterminated, rounded up into some sort of... camp... hold on, I'm trying to concentrate... basically, the one with fox in it's name loses because I assume it's about creepy assed weeabos.

Also, I've only ever seen Avatar, and that soundtrack was fucking terrible. They didn't bother changing it to match an alien environment when they stole the rest of Ferngully. Whatever. I can't recall a soundtrack that I've liked particularly from this year either, so  fuck it. NO AWARD FOR ANYONE.


This one's easy. Nine Inch Nails's theme for Tetsuo 3 (or bullet man or whatever). OH! No, wait, I forgot about the song from Stilyagi with Ariel Pink! Tough choice, but at least I know for a fact that the new Tetsuo was from 2009, so they get it.


So basically, every film that WASN'T made in America. Cool, that's fair, so they're exempt from every other category, even though none of your own films were worth watching?

What else came out in 2008? '06 through '09 is such a blur for me, film wise. And the fragmentary situation with the news since Monster Zero died (Sci-Fi Japan is the most ridiculous piece of crap I've ever seen, they're nothing but contests and cartoons, no actual monster movie news) has made sure I always find out about movies at least 6 months after they're released. With that said, this one goes to the first Digimon movie, so suck it, bitches.

For the actor awards, the only name I can attach to a face AND stand to look at for more than five minutes is Mo'Nique. But aren't we forgetting something? Avatar had both Sigourney Weaver AND Michelle Rodriguez, while Star Trek had that kid from the White Castle movie, the other guy from Shaun of the Dead, and Sylar... FUCKING SYLAR!

FUCKING SYLAR
for All Of The Acting Awards
The only ones left are best Director and best Picture. Duh and Duh-er.

GUILALA ATTACK THE G8 SUMMIT
for Best Damn Comeback Since Gamera's Heisei Movie, But Only The First Two Because G3 Sucked Balls And They Forgot The Whole "Monster" Part Of The Monster Movie
And that's it, Guilala is truly one of the big boys now, and with only on impossible to hate X-treme B-movie and one hauntology done right actually funny kaiju comedy under his belt, there is literally nothing to hate about the guy's entire career. Godzilla, Gamera, and Gappa (who cares about him?) can't say that. Plus, Guilala surprised everyone by beating Clover to the punch of being an established, big name monster with an actual series (it's 2, that counts), instead of just some faggot calling out Godzilla for no good reason and then never actually trying to prove yourself and dieing right before you had a chance to ever live. It's been three years now, and now sequel. You know how long it took Godzilla? One year. King Kong took even less than that.

Point is, Guilala is better than Gamera... and, if Toho fucks up the pacing and misses the king's 60's anniversary waiting for that legendary turd to drop, Guilala can just have the fucking throne, because Godzilla is obviously not in the mood to defend it. 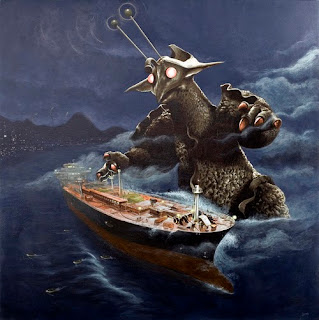 I'm serious man, Guilala means business this time. Only took him 41 years, but whatever.

BEHOLD! I AM GUILALA, THE NEW KING OF THE MONSTERS!!!
Posted by Princess Malyssa at 08:28 No comments: