A Warning About Splice

The Godzilla stuff will have to wait, there's something more topical happening:

I just got back from seeing the film Splice, and while I'm aware that this will get registered on Google after it will be useful to the degree it needs to be, I'm still compelled to document this for any future audience that made the same assumptions about the film I did.

They were dangerous assumptions, and I'm still schocked by what happened.

Splice, a 2010 film starring the worst Jack Driscoll of all time and produced by Guillermo Del Torro, was presented to me by a series of ads as simply another monster movie. No name monsters, no name director or effects artist, just a normal old monster movie where science creates a monster man could not handle.

Well, all of that is wrong. It turns out that what the movie is actually about it raising a genetically engineered monster as your own child. Sure, there are casualties (seven, Fred & Ginger, that one guy's brother, some jack ass, a rabbit, a house cat, and the worst Jack Driscoll of all time), but the monster doesn't really go on a rampage. There is a "rampage-esque" climax where Dren makes most of her kills, but this is not actually what the movie is about. The rampage is the opposite of what you want to happen, and when it does, nobody whens.

I'm going to get a little more detailed, but before I do I need to make this clear: you remember when Godzilla died in 1995? You remember Audtition and how it betrayed everything you believed about movies? This one does both of those things for two hours.

What ACTUALLY happens is this scientist couple (oh yeah, all of the exposition is presented as a "two scientist friends" scene, and the crazy kids are in love, so already the empathy levels are dangerously high) who is tasked with curing all diseases. No problem, becuase they just happen to be geneticists who can freely splice the genes of creatures in order to synthesize specific protiens that somehow act as stem cells or something.

If this sounds bogus to you, then you are gonna need to be even more careful with this film, because you just discovered something that takes the protagonists 'till the third act. They are not subtle about this revalation, and it makes the climax even harder to deal with: It was NEVER about the science.

So they are being pressured by sponsors to produce a viable product to put on the shelves and stop playing with Fred and Ginger (who are adorable little CGI monsters). The two scientist friends don't like this because they are on the threshold of combining human dna with their splices, and they say this means the medical possibilites of blah blah blah they want a baby but want to cheat the birthing process.

Also, the girl has issues with her mom.

So they splice human dna into some sort of cocktail for, again this is something that they have put up an emotional wall to keep from realizing, the same sort of gratification Frankenstein gets when he brings people back to life. They tell god to go fuck herself because they want to do this.

The problem is that they succeed where the Frankenstein films fail, that is the monster, her name is Dren, isn't a one-dimensional poorly acted piece of shit, it's a dynamic character that acts exaclty how you would expect a spliced together monster to act... completely unpredictably.

So it becomes clear that these two were just fucking around, because they literally have no idea what new organs Dren is going to form next, and neither does Dren. Whats more, Dren is growing older much faster than humans, and only has so long before she dies. Plus, whatever the hell protien they were looking for? Dren has it. So financial and personal success all in one.

But Dren isn't a human, she's a cocktail, and the whole movie you have no idea what she or her parents are going to have to deal with. This is what the movie is actually about. These two nerdy geneticists trying to raise a monster that they have no idea how to deal with.

So if your idea of a romping good monster movie is two hours of heartbreak, then by all means Splice is the movie for you. If you want your monsters to just be monsters and not worry about how even the simplest mistake that any newby parent could make might be the spark of... who know what, then you may need to avoid this.

As for me, I loved it. This article is so that you can get the story straight, though, and not to pass judgement. If you want my opinion, then this is the most heartbreaking movie i've seen since It's a Wonderful Life, and that it surprised me about this just made it even more effective.

I can't even count the number of times I just wanted to reach out grab the characters and just try and get them to sort everything out. It's just like "Let Dren have the fucking kitty! You don't know how this is going to affect her, you can't afford to be this callous!" It's absolutely insane.

And when she does is foreshadowed by the fate of Ginger, you are routing for no one. At the end of the film, no one has won. The actions taken by the survivor is simply one of not having anything left to do.

I could ramble on about this movie for decades, but the point I want to get across here is that Splice is anything but your typical monster movie. It's an extremely taxing drama about the realtionship between parents and a child when no one has the answers already figured out. Like, when my sister had her son, she and her husband did everything they could to prepare. A child, by the way, is not something to be taken lightly. Take that same child, however, and make it so the kid could kill you and there is no precedent for it's growth pattern, but the love is still the same, and you have Dren.

One more thing since I'm already issuing warnings. Dren grows up very fast, and she is still part human, so things happen that no human being alive today is prepared to know how to react to. This happens twice, and the second time isn't consensual.

So, there's that. I did mention this movie isn't fair, didn't I? 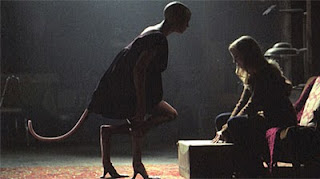 ...okay, but I do want to take this chance to monday morning quarterback at least this scene. So, first of all, you should never have taken away the damn cat, but let's just skip that. Here, Dren is a fully mature young woman and sees her own mother as competition. No one is to blame here, there is just no precedent for what is normal here. There was never a Dren before this. So how do you handle this?
It may not be possible to save the cat. Let's acknowledge that. But don't slap Dren, that doesn't help anything. Rather, swallow your surprise and stay calm. Getting excited isn't going to help anyone. A good emotion to show here might have been sadness. Surprise, shock, or anger just present yourself as an antagonist, where as sadness might get a more sympathetic reaction. And if you could just have gotten Dren to calm the fuck down here, you may have been able to figure out that she was, you know, getting older, and try to sort something out with her.
She may not speak english, but she does spell it. Plus, Dren has always responded well to leveling with her. My favorite scene in the movie is where she sprouts wings and starts freaking out, but cools her jets after somebody FINALLY says the "L" word.
And as we find out after her tail tip is removed, she never really became impossible to communicate with, she just became hyped up on hormones. Treading a bit more carefully might have saved everyone some greif.
But again, this is just monday morning quarterbacking.
And, in case you're wondering, I don't think there was any other way to handle this than what Adrien Brody's character did. There simply wasn't another option.
Posted by Princess Malyssa at 02:07