Godzilla Continuity part 2: Showa times is good times for all 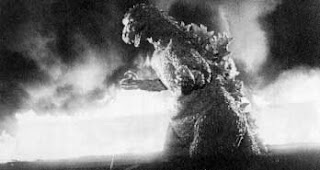 So the last thing I wrote was to set some ground rules about how the only confusion in the timelines is created by overzealous fans and unscrupulous americans.

I will stick by this, even though the Showa timeline includes... the two King Kongs. Don't worry, you'll see that this isn't a problem soon.

Now, the way I'm going to do this is first go over what material is considered part of a given timeline, how it affects the other material, and and then just up and list the events of the timeline in chronological order. Simple enough. Here we go:

First thing we need to make clear for the Showa timeline is which non-Godzilla movies count? Well, all of them, but that requires a little clarification. First, let's pretend we're a Japanese kid living in a big city, let's say Tokyo, in the summer of 1969. At this point, seven different monsters that originated outside the Godzilla franchise have been sucked into the timeline, and most of the time direct reference to a previous appearance, or failing that at least an indication that the monster is already known is stated in said film. The logical thing for us school boys to decide, in a time when "multiple timelines" aren't even considered mainstream in the real world, let alone a fictional one, we should simply assume that all the other Toho films count. There is simply no other reason to think so.

And it's the same from the perspective of the studio at the time. Remember, until 1978, it was unthinkable that any multiple timelines could ever exist. As far as Tomoyuki Tanaka was concerned, and and all kaiju that appeared in other Toho media were a canidate for Godzilla's next foe. This creates an odd state where each non-Godzilla toho monster/scifi film exists as a stand-alone work in and of itself, but is never truly isolated. If at any time Toho had pit Godzilla against Dogora, no mending was needed because that film always existed in the "background" of the Godzilla series anyways, just waiting to be called off the bench and really shine.

This was standard up until the dissolution of the studio system in the late 1960's/1970's (specifically 1970 for Toho, but you know what I mean). After that, we get stuff like the vampire trilogy, Prophecies of Nostradamus, and some wierd movie about a cartoon phoenix. Do these count? It's debateable, but as far as I'm concerned, the attitude towards these movies that enabled them to have their characters recycled in any other Toho kaiju flick at any moment was dependent on the system that existed prior to 1970, and the loss of that changed the content of the movies in ways that affected more than just Godzilla. Thus, from the 70's, only Space Amoeba and War in Space have ever really been close to Godzilla series in the same way as, say, Frankenstein Conquers the World.

Now that that's out of the way, we can actually stand to narrow it down even more. While the space trilogy and two 70's films mentioned above are undoubtedly part of the over-arching "Showa Toho Timeline," they don't necessarily have anything to do with the events of the main Godzilla series. To make things less complicated, we'll focus only on those that do. These are: Rodan, Varan, Mothra, Atragon, Frankestein Conquers the World, War of the Gargantuas, and King Kong Escapes. Again, I'm not saying The Mysterians or Dogora don't count, but they don't directly deal with the topic at hand, so we're going to skip them.

Most of these films take place in the year they are made, and only a few have any "ancient" backstory. All of these rules will change with the Heisei series due to some degree of concious timeline construction, but the situation here is that each film is intended to be watchable without having any understanding of the rest of them. Godzilla vs. Mothra is not dependent on Mothra for viewers to enjoy or understand it, and, to be honest, it was a while before I even knew Mothra HAD a movie before she fought Godzilla. So, the majority of these films are just localized events that connect to the other films simply by using the same monsters.

So, I'm only going to address the exceptions in detail. In the 1950's, we have four monster attacks. Two Godzillas, one living on Lagos (possibly where the Angilosaur was) and one living near Odo Island were mutated as a result of the Castle Bravo nuclear test on the Bikini Atoll. The first Godzilla is decisively killed by the Oxygen Destroyer, while the second, Lagos Godzilla only appears a year later (too soon for many), and is merely buried under ice. Two Rodans, mutants again but this time Pterosaurs and not Dinosaurs, are found living under the surface around Osaka, somehow being "preserved." One of them, the female if they are a pair, since Rodan is always refered to as a male from here on out, is never seen again, and so dies. Varan, who I can't think of as anything other that a Varan (for obvious reasons), even though the resemblance is pretty iffy, is presented as some sort of mountain god, before being uncovered as an actual giant monster, no one ever figures out what it is, and then it swallows explosives and dies.

I really, REALLY hate Varan. He and his movie (his GORGEOUS movie, however) make no sense to me, and I'm still not entirely convinced that his appearance in DAM was anything other than a mistake. Even Baragon gets several shoutouts, and has a suit actor portray him for new footage. I'm not discussing him any further until I get some sort of explanation as to what the hell he's supposed to be and why one second of a terrible prop counts as an "appearance."

Early 60's. Mothra 1 hatches, turns into adult, retrieves fairies, goes home. Godzilla 2 breaks out of the ice just in time for the Toho iteration of King Kong to be sponsored by a pharmacuetical company. They fight, bets are continuously made, and in the end everyone is dissapointed.

ATRAGON: This movies presents of with some actual dates to screw around with. The events of the film still happen in the year it was made, but it has some additional backstory. We are told the Mu civilization went underwater around 12,000bce, and immediately began building it's subterranean city. Atragon has it's own deep past, as it was the... I wanna say fourth (right? because the third prototype supersub is the one the Muvians stole, correct?) in a series of super subs designed to turn the tide of battle in WWII. Well, by the time the Atragon had actually begun construction, the war was already over. Captain Jinguji, however, continued to build the thing because either he believed the war was still going on, or he was too stubborn to accept surrender. Either way, construcition of the Atragon occured between 1945 and 1963.

In 1964, we have this big monster opera where Godzilla 2 finally shows himself after the fight with King Kong (KK also wades into the sunset for a very open-ended fate), and now there is literally nothing left to stop him. Since the whole sponsored monster fight thing seemed to get rid of him for a couple years, why not do it with a monster you know you can trust, like Mothra? That's what happens, and in the process Mothra I dies, Mothra II and III are born, and one of the newborn larva dies from mysterious circumstances that were probably made explicit in the original version, but it isn't important enough for me to go back and check now. Godzilla is sent off again, but this time for LESS than a year, returning at the same time as the surviving Rodan, and the arrival of the worst of them all: King Ghidorah.

KING GHIDORAH: Much has been said of his origins. He is often regarded as a mysterious loner who travels through space destroying anything and everything simply because he can. Well, this is his persona, and certainly the vibe he gives off for most of his starring roles, but he does in fact have a definite origin. I don't want to spoil it yet, so I'll just say the information that was given to us in his first film: all we know at this point is that he completely wiped out the civilization on Venus in 3000bce, and has finally made his way back into this side of the galaxy (or wherever he was all that time) just in time to his ass handed to him by the combined forces of Godzilla, Rodan, and the remaining Mothra, who has convinced the other two to fight.

FRANKENSTEIN: Now we have a film directly connected to the showa Godzilla series that does not take place in the year it was made. FCTW begins in 1945, where we see Nazi officers reposses the heart of Frankenstein (let's just say this means the heart that the doctor created as opposed to any specific monster), which was being used for the scientific research of Dr. Reisendorf, who came into possession of the heart... somehow. The best part of this is that you can fill in whatever Frankenstein continuity you want, Universal, Hammer, or even the Andy Warhol one. The only events that need to occur is the creation of at least one Frankenstein monster, the recovery of the monster's heart, and the possession of that heart by Dr. Reisendorf before August 6, 1945.
In the events of FCTW, the action takes place 15 years after the Hiroshima bombing, meaning 1960, not 1965. Furthermore, this gives a total of 6 years for the monsters Gaira and Sanda to finish growing from the cells of... let's call him Frankenstein 2, for lack of an overtly stated number. It's been a while since I've seen WOTG, but I'm sure Sanda didn't live with that scientist for over 6 years, it doesn't take that long for those monsters to grow. Baragon and Oodako also appear. Both seem to die, but I'm betting neither did, even though we never see Oodako after his fight with Gaira.

Godzilla fills out 1965 and 1966 by turning his relationship with Rodan and King Ghidorah into a more "we aren't the best of friends" thing rather than pure utter hatred, and then somehow winding up in a King Kong movie where Akihiko Hirata blows up an island, but not before the surviving Mothra, in adult form, saves the human cast from it. Ookondru also shows up, then dies.

Next time: Destroy All Monsters, the whole mess about the two King Kongs (trust me, it will make sense), and me gripping about the continued willful ignorance of just how important Zone Fighter is to the Showa timeline. It's extremely important. And, if I don't ramble too much, the actual timeline.
Posted by Princess Malyssa at 04:48