So I saw Predators on the day it came out, and it was better than every previous solo Predator, so that was neat, but... well, let me describe it this way: Do you remember in the late 90's when Toho was pushing those solo Mothra movies? And when you were watching them, it felt like it was trying too hard and all you could think of through the entire movie was "Why in the hell don't they just call Godzilla? He would wipe the floor with Death Ghidorah!"

Well, that's what this movie was like. It was way cool, to be sure, but the idea that Predators can somehow carry a movie on their own is officially misquided now.

But I don't want to bitch about waiting another year or two for the next Alien movie, I'm going to have a biology lesson about the Xenomorphs! So, let's cut straight to it:

First things first: what counts? Well, everything, obviously, but this is really confusing for Alien fans (who are the worst fan-base of all time, by the way, at least G-fans still support the franchise financially even if they keep bitching about Toho giving them exactly what they have been asking for since 1995). So I'm going to make this very clear:

Are we good? Good. Now having said that, I also want to let everyone know that other than the movies, the Alien franchise is also one of the most poorly managed of all monster series. There is a huge well of stories from the comics, games, and movies, but the comics and games are hard to track down, rarely reissued, and don't make a whole lot of sense. The idea that some things "don't count" is ridiculous, but given how much worse some of the comics are, it's easy to understand the desire to just ignore them.

That's both hard and easy for me to do. Easy, because I haven't read half of them and don't know how to go about tracking them down or even finding out the order in which they were published, and hard, because they explain the origins of the aliens and the space jockeys, and have many times more monsters than the films... including the Jock Alien.

There is also the thing about Newt and Hicks. In the first series of Alien comics, they followed Ripley, Newt, and Hicks after the events of Aliens and had them going to the Alien homeworld, fighting Space Jockeys, and even a "MOTHER" alien, which is the source of all aliens, and some other wierd looking "super-praetorians" or something.

It's awesome, but in Alien 3 Newt, Hicks, and even Ripley die. So the comics represent an alternate timeline, right? No. Dark Horse reissued the comics and changed the characters names. Thats when I realized that the comics are in some other timeline entirely, they just don't want anyone to know.

So die-hard Alien haters (whoops, I mean "fans") will be glad to know that I'm only focusing on the films. They may be unhappy to learn, however, that I'm not going to be willfully ignorant about certain scenes, and I'm not going to pretend that the Alien 3 dvd didn't come with two cuts of the film, or that I closed my eyes during the scene where Ripley finds Brett and Dallas at the end of the extended cut of Alien. It's all in there, stop living in fantasy land and just watch the damn movie.

So let's take this one stage at a time:

The egg is a logical starting point because it is how we are first introduced into the Xenomorphs, and is the required beginning of the life-cycle for 90% of individuals we've seen. The egg has been considered a living organism in it's own right, which makes alot of sense to me, because non-living shells don't normally decide when the creature inside is going to hatch. The Xenomorph egg makes the decision for the Facehugger, which lives inside the egg, and pounces on anything immediately after the egg senses a host nearby. In this respect they are more like seeds than eggs, and can survive for at least 94 years, and I'm guessing much longer.
The egg stage produces two types of facehuggers: the normal one and the super facehugger. It can be laid by any Queen Alien, and the first stage of the Maternal Queen. Eggs can also be made directly from hosts by an adult, non-praetorian alien in the absence of any other member of their species.
Stage 2: FACEHUGGER 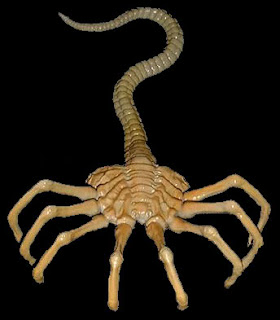 The facehugger is not simply a larval stage, that would be too easy. Instead, it deposits an embryo inside the host's mouth, and then dies. This is a pretty straight forward stage, and it can be bypassed entirely. From here on out, no two aliens will be the same, from the embryo laid by the facehugger to a full grown queen, aliens become extremely cosmopolitan.
The normal facehugger can only be (so far) produced by an egg and can only (again, so far) deposit embryos into a host.
SUPER FACEHUGGER 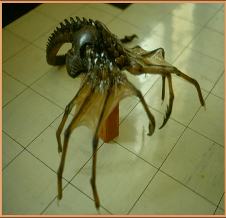 The super facehugger is produced by an egg the same way as a normal facehugger. How or why certain eggs contain super facehuggers instead of normal ones is unknown, but one explanation (the only one we're given) is a compound called "royal jelly," which is produced by the Queen and can be used to "knight" aliens or eggs, prompting them to turn into praetorians or bear super facehuggers in order to produce a splinter colony.
Not only is royal jelly not scene in the film timeline, but it's also not stated to produce super facehuggers, only praetorians. It seems to me like the Queen Alien from Aliens laid a super facehugger on purpose, she was on a star ship, convieniently laid enough eggs for the crew and a dog in hopes of placing a colony wherever it lands, and intended that new group to  have a new Queen to lead it.
So, my working hypothesis is that an egg containing a super facehugger can ONLY be created by a Queen, and can not be created by a desperate adult, nor can a queen embryo be deposited by a praetorian. Given this knowledge, the chemical process that allows it is no longer important.
Super Facehuggers are produced by special pre-determined eggs laid by a Queen (and I'm guessing not the Maternal Queen either. It seems more likely that her "super facehugger laying" stage was actually replaced by the placental stage), and they deposit a Queen Embryo, which, also it is still developing and could turn into any number of things, is predetermined to go directly into a Queen stage once it matures.
Stage 3: EMBRYO

Embryos are the actual Alien. Unlike the eggs and facehuggers, which merely give the appearance of a larval stage, the embryo will not deposit or lay anything in order to reach adulthood.
This is also where each Alien's unique physiology begins to develop. Embryos have not been seen on screen often, and when they are they look like tiny chestbursters. This is because an embryo develops according to the host, and everytime we've seen an embryo, it was in a human host. I imagine if we were to see the Dog Alien's ultrasound, the gap between it's embryo and chestburster stage would have been much more apparent.
There are three base types of embryos: normal, queen, and cloned. The queen embryo develops the same way as the normal one, but is pre-destined to shed into a queen after it is born, skipping the adult stage entirely. The cloned embryo recovered from Ripley 8 is on the surface a queen embryo, but has human dna hardcoded into it that further spells out an extra stage of development that possibly replaced the "lay super facehugger egg" stage.
Alien embryos can be deposited by facehuggers or praetorians in multiples. Queen embryos can only be deposited in a host by a super facehugger. Embryos develop in a sort of artificial womb that gives them characteristics of the host, and emerge as a chestburster unique to that type of host. Many different chestbursters can be created this way. Queen embryos are the same, but all gained characteristics of the host will be applied to a Queen, no matter how the chestburster emerges, it will still be a queen alien when it sheds.
Stage 4: CHESTBURSTER 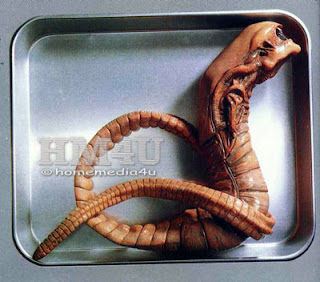 The chestburster bursts out of your chest. This is a baby alien that will shed it's skin to become a full adult. Pictured above is a chestburster arising from a human host, the most commonly seen kind. It will become your average, boring adult alien. 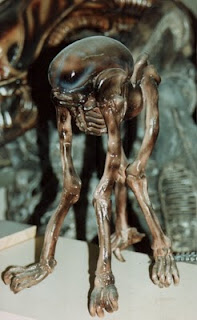 Bambi-burster. This chestburster is the result of a dog or ox host. In the design stage, Giger gave the creature a much more feline appearance, which is still apparent to some degree in the film. Given this plus a qoute from Ridley Scott about what a cat alien would look like, it can reasonably be assumed that all quadrapedal mammals would produce a similar looking chestburster. I say dog OR ox, because a different animal is used in each cut of the film, and you don't get to just ignore one of them.
The bambi-burster is also remarkable for being far more developed than any other chestburster. The tail is ludcrously short, while all four legs are quite long for an alien it's size. This is evidence that host-based development start early in the embryo stage. 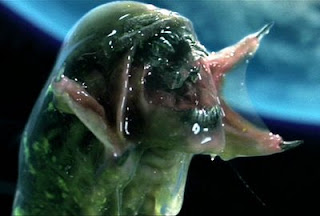 Predalien chestburster. Emerges from a Predator host. Same story. One mildly interesting thing is that Predaliens are apparently viewed as sacreligious by Predators. They feel this way, yet are totally fine with using whatever the indigenous population is as hosts.
Predators are assholes. Nothing they do makes any damn sense. They keep portraying them as "honor based social hunters," but take every oppurtunity to undermine this characterization in every film EXCEPT Alien vs. Predator. And some wonder why Paul W. S. Anderson is king of the universe.
At any rate, you can clearly see that the above chestburster does not have the extra arms or headfrill of a queen, meaning it was born from a regular, non-queen embryo and non-super facehugger (which you can also see in the film). This is important for later, because I'm going to cover the newest addition to the Alien life cycle (in the film timeline) in the next part, and it's called a Praetorian.
So I stop here because I'm getting tired of this. Expect the next thing to be about Godzilla again, and then maybe I'll finish off this Xenomorph thing after I get my GFW wild mass guessing out of the way.
Posted by Princess Malyssa at 16:52