Tawa is a Jerk 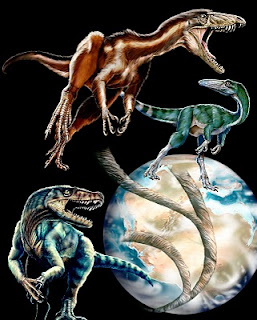 Tawa. Four little letters that are simultaneously breathtaking and infuriating. What the heck is a Tawa you ask?

Yes, I know you didn't ask. If you did, you wouldn't have typed "Tawa" into the search bar. I love it for because no matter what other bullshit it caused, it will always be remembered by me for setting the "Coelophysid-Averostran" monophyly thing in stone, and that's nice, but it wasn't strictly necesary. I don't anyone really still though that Coelophysids were Ceratosaurs or anything stupid like that anymore.

Whats disturbing about it is the reactions real, honest-to-goodness, professional scientists are having to it.

So, Tawa is basal to both Coelophysids and Averostrans, forming a sort of sister group while still being recognizably Theropodan. The trick is it also holds on to some Herrerasaurid traits, traits that a) you'll have to go to tetrapod zoology or something similar to read about and b) decisively indicate that Herrerasaurs are close to the ancestry of Theropods, and must have occured after the Theropod-Sauropodomorph split, which then makes "Eusaurischia" paraphyletic and therefore not real except in magical Linnaen fantasy land.

I'm jumping straight to the point here because I already wrote something like this on my faceplace and because I assume if you searched for this you're already familiar with what I'm talking about. Tawa has been cited as suring up Herrerasaurids AS THEROPODS! This makes absolutely no sense to me, and I'm not going to pretend what the hell is wrong with some people just for the sake of argument. 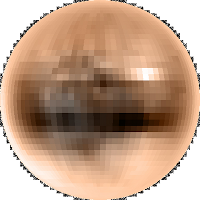 First, the analogy: Remember when Pluto stopped being a planet? Didn't we all have a pretty curious reaction? Sure, anybody with a brain and an interest in the way the world actually works must maintain an objective viewpoint with all this science stuff, but saying Pluto was not a planet was a bit of a jolt to a lot of people. Funny thing is, it actually is still a planet.

You see, they redefined Pluto as part of a new category of celestial body called "dwarf planet," and said that they say is not a planet. For those of you who figured out the answer already, go ahead and skip this paragraph while the others catch up. The new category is a great idea in itself, because at the time countless numbers of little pluto-sized planets were being discoverd all over the solar system, so it seemed that Pluto is not an odd man out, but just a member of a different type of family, which makes perfect sense. "Dwarf Planet" is a perfect name for object like Pluto, as well as Sedna and Ceres, because that's what they are... small rocky planets that formed under similar conditions. Nothing wrong here, all the work is sound... so how do we get from Pluto being a new class of celestial body to it being legal to own dwarf people as slaves, being that they are no longer considered people? Who's job was it to proof read this stuff? Still don't get it? Here's the answer: a dwarf PLANET is still a PLANET, because the word DWARF does not negate the following word. If Pluto was a NON planet or ANTI planet, it would not be a planet. But Pluto is a DWARF... PLANET... a small planet that is now part of a special class, just a GAS GIANT, which doesn't eve have PLANET in the name. And nobody is saying Saturn isn't a planet are they?

So that's the situation with Tawa. Maybe some of you haven't figured out why calling Herrerasaurs "theropods" is a pretty stupid idea yet. That's okay, I'm going to illustrate it for you.

This is a cladogram of the relationships between Saurischians before we found Tawa. It features the now known to be paraphyletic "Eusaurichia." Notice the position of THEROPODA and Herrerasaurids:

So, I'm not certain on where Guaibasaurids were supposed to fit, since I heard they were closer to both Theropods and Sauropodomorphs. Just for shits and craps, I'm putting them up with Panphagia. Pay close attention to the organization of Theropoda, so you can see just how much turmoil Tawa has thrown it into... truly it must be heinous. Here is the family tree after Tawa:


Do you see it? Do you see the unruly state of affairs that the Theropods have been reduced to? 'Cause I sure as hell don't. So right away there's the obvious fact that nothing actually changed within Theropoda. It's now called "Neotheropoda" for no good reason. Go back and look at the other cladogram, go ahead and scroll back up, I'll wait. You see the yellow text? It's the same isn't it? Yeah, it is.
Now i'm going to introduce my new cladogram, based on a bunch of heresay and subjective nonsense that has no real basis in reality. Surely, this table is is amatuerish at best:

The joke here is that, of course, this isn't my amatuerish cladogram, it's the same one as above, but proof-read. I moved the word THEROPODA to it's original position, included Tawa because I can see the kink in the jaw from where I'm sitting, and just to be nice, I even kept the "Neotheropoda" part.

There is no need to say Herrerasaurids are Theropods. Turns out a lot of our old ideas about the placement of Herrerasaurids was indeed not the case, but our understanding of what is and isn't a Theropod actually looks clearer now. So there's too more things I need to address: 1) Why can't we move Theropoda to cover Herrerasaurids anyways, and 2) What makes a Theropod a Theropod anywhichways?


1. Herrerasaurids as Theropods is far from a new idea. Idiots have always argued for their inclusion. Does that sound harsh? Take a look at the facts: the ancestor of all dinosaurs was obviously a carnivore, probably an omnivore but let's not bet on it. Therefore, all basal saurischians closer to Coelophysis than Panphagia should have been carnivorous as well. So, a small meat eating dinosaur from the late Triassic could be almost anything. So meat eater does not equal Theropod.
Now, like the Pluto thing, Theropods are a personal issue for me, so I have a hard time being objective about these things. That said, the more radical the idea, the easier it is to be openly biased. I agree that outwordly, Herrerasaurus does look like a Theropod, but that isn't enough for me to except him as a relative to something like Tyrannosaurus or Aquila. Theropods are special for a reason, a whole slew of physiological reasons that some primitive saurischian just can't compete with.

So, I can back up my personal feelings in this case because Theropods really are very different than other dinosaurs, I could say better too, but then that's crossing the line.
2. Quick, name one thing only Theropods have and all Theropods have. It's okay if only very specialized forms that no one debates are Theropods don't fit, I'm looking for something clearly identifiable in Coelophysis and 90% of it's descendents, but NOT in any other animal.
Give up?
Well, the answer I was looking for was a wishbone or furcula. I've never heard of any other animal having a true wishbone. I have heard that Massopondylus (and I guess all Massospondylids?) have something LIKE a furcula gained from convergent evolution, but that's about it.

And that was the last nail in the coffin for me. According to Tom Holtz, who I'm going to totally trust on this because I can't find any other source on the matter, no known Herrerasaurids have been shown to possess a furcula. So, they can't be Theropods. It's all really very simple. 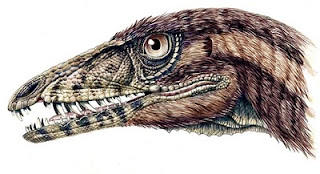 I am pretty stubborn about this, sure, but I've got a damn good reason. The case for Herrerasaurids being Theropods is valid ONLY when you find a Herrerasaurid with a wishbone. I except the conclusion that they are closely related, so don't bite me, Tawa.

I think I've already beaten this to death, but the real moral here is that scientists need to proof-read and stop missing such obvious crap. It's irritating when you hold someone's logical reasoning ability to such high esteem only to find out that they didn't realize calling something a dwarf planet does not mean it isn't a planet.

Also would someone please write a god damn Averostra article on wikipedia? It's 2010 now, this shit is getting ridiculous.
Posted by Princess Malyssa at 22:20