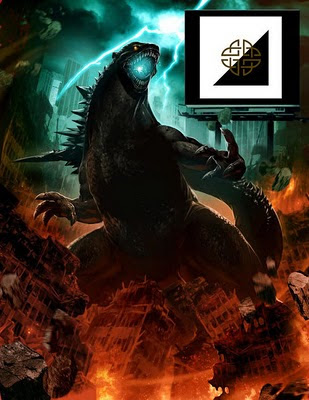 When I saw this poster, I squealed like a hysterical schoolgirl. For obvious reasons. It took a whole 5 minutes for me to go from "jonas brothers screaming" to "star wars nerd rage."
Remember Godzilla 29 and how cool it was going to be, and how it was totally going to be the movie Banno has been waiting to make for, like, 40 years? Yeah, well, guess what. Hollywood fucked it up already, and the film isn't due for another 2 years.

Yeah, I know, the poster looks so cool, and it was confirmed (like you NEED a confirmation) that Godzilla will be X-ing at least one other kaiju, but then they had to go and use the c-word.

So that's it then. Nevermind that Godzilla single handedly INVENTED special effects, or that CGI is a discredited trope that hasn't been used in a monster movie since... uh... Peter Jackson's King Kong (and we all know how THAT turned out...), or that the ability to use CGI as an enhancement to existing practical effects creating a whole new field of integrated technology that would have been Eiji Tsuburaya's dream come true and is responsible for some of the most gorgeous monster movies of all time (Silent Hill, GMM, AvP, any recent Werewolf movie, the new Gamera, etc.), and I guess it doesn't really matter that not only does the movie going audience despise the very idea of CGI characters in modern films, but the niche market a Godzilla film occupies hinges, uh... 100% of it's audience based on whether Godzilla is done practically or not, something that YOU'RE NOT EVEN SUPPOSED TO ASK ABOUT!

This is non-negotiable. Fucking fix it or I walk on the franchise. I've been obsessed with Godzilla since I was 2, it was my one insane fanboy thing that I could really call my own, the one thing I got irrationally pissy about when the status quo was nudged a little (remember when they made King Ghidorah a good guy? Those were dangerous times to try and talk to me), and now I can't even have that.

Fuck you, Godzilla. Maybe it isn't too late to change my major. Looks like it's time to quit film school and drop the "armchair" from "armchair paleontologist."

Although, if Satsuma walks, then Godzilla himself is still cool, and we just have another GINO on our hands. That would be a very sad turn of events, but at least it means there is a better future to look forward too.

P.S. It would be really nice of you to somehow rise from your grave just one more time, and get this "cgi" thing dealt with. Just sayin'.
Posted by Princess Malyssa at 03:35