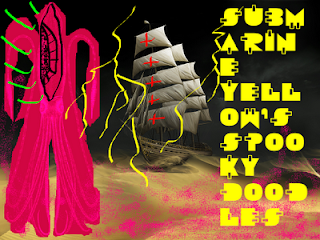 The only thing left is the inevitable cover bands. By the by, you CAN NOT have Submarine Yellow's Spooky Doodles. That's mine. I call dibs.
But really though, why are there other things? Do we really need them anymore? We've got Ariel Pink already, soooo...

And it's wierd, because I've never felt this way before. I mean, really, I'm done. I know that, logically, we are only at middle Ariel Pink, and the late is still to come, but I can't stretch my brain around in order to figure out what the hell possibly comes next. Maybe I'm tired. Maybe all those wild times in the 70's with acid and Boyd Rice burned me out, maybe I'm still bitter after the divorce, or perhaps this has something to do with one of those other believable things that I totally did, but I'm just done.

Recently, I've tracked down some Ariel Pink stuff from 1996-1998 and such much that, before today (heheh) I never even bothered to look for because, get this, I was too scared of what I might hear. Like, if the stuff he was choosing to allow us, the unwashed public, to hear was, uh, like THAT, then what were his obscure and gritty underground recordings like? The very concept gives me shivers, and the fact that there is SO MUCH, that not many have dared attempting to collect it, and that Helen, Suicide Notice, and Artifact are totally enough and now I can die, just makes the whole proposition of "the super old school" Ariel Pink so mind-numbingly overpowering that...

I can't quite say what I'm trying to say here.

But, so what happened is I did find some of this stuff, specifically Hum It In the Streets, first run Underground (crash is still cemeteries/railroads, 2 or 3 cut songs, no Until the Night Dies) from like 1998, the original Scared Famous or FF>>, I forget, but it's got the "lost tracks," a version of YAS DuDette with the 15 minute steviestorm broken down (kinkaid? I was calling it "love emporium" this whole time!) and some other goodies, and something called "Welcome to Our World" which I can't find on any discographies.

And, of course, my worst fears were realized. Crazy 90's Ariel Pink (from the inception of Hauntology, and while his industrial influences are MUCH more prevalent) is painfully perfect. Did you know he was doing hi-fi in 1998? True story. The downloads are still around, so check this out to get them. Some of the tracks on this these things ARE on the accessible releases, but then, it would be wierd for me to assume you don't already have Underground or Oddities Sodomies Vol. 1 (where is vol. 2 already?). That, plus, being a pirate is cool.

And I'm still very hesitant about listening to all this, I mean, if the oppurtunity arose again I would grab it in a heartbeat because I can't miss a single thing, but still, knowing now that my hunch was right and 96-99 (or so) was just as, and in many cases more cool that, say, something on paw tracks you can just up and buy.

And certainty is always more scary than a vague idea. You want haunted, you say? The muddy netherverse of Ariel Pink in the late 90's is officially the most haunting thing on the planet. Color me (yellow/pink/whatever) artistically sated, I just don't need anything else anymore.

As a wise man once said, "Originality is dead, long live variations on a theme."

That is the will of the Grand Council of Hauntology.

But this too was all but a part of Architeuthis's plan...
Posted by Princess Malyssa at 00:18