It's Ba-La-Ur, not Ba-Laur, because THAT would make too much sense 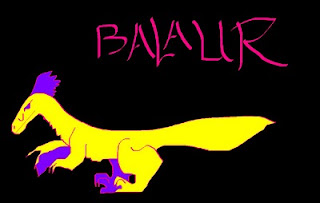 I'm so damned good at drawing in MS paint. But then again, the program is so flawless, you know?
Balaur. For mans last hundred or so laps around the sun, the children, fascinated by the very idea of what a dinosaur is, being better than all other chordates in every conceivable way, will no longer utter the familiar bad impressions of a T. rex, Velociraptor, or the proud and mighty bald eagle, but rather that of this curious little mutant bastert.

Mark my words, non-existant readers, the dreams of the children of the future will be filled with the adventures of Balaur, the raptor with four killing claws.

Sure, that last paragraph was beyond redundant, and there are many other wicked wierd things about Balaur that deserve plenty of attention, but just as the rule of thirds continuously drags our eyes away from the center of an image, so too (four) does the fact that Balaur has four killing claws completely render my mind incapable of caring about anything else.

Many times I have been asked why I have not bothered pursuing a career in paleontology. My usual answer involves not being obsessed with dead things, and why the hell would I want to toil away in Lianlong in the heat when I could just walk outside and see whole flocks of living dinosaurs without needing to dig around in the sand to find them? But of course, it is important to remember that, if I had discovered Balaur, my paper describing it would simply be "raptor with four killing claws" repeated over and over for, like, 10 pages. And then I would retire.

Simply put, I can't possibly imagine what left there is to do. Remember Microraptor when he was new? Wasn't that wierd as shit? I remember the first thing I thought was "wow, that looks like a Great Blue Windrunner... so, guess that's been done then." It was complete absurdity. And then we found out that four wings was actually the basal condition of Paraves, and we even found some Archaeopteryxes with those crazy long leg feathers. So, what we had assumed to be a futuristic evolutionary leap forward was actually the old school design that dinosaurs had decided was "so last era." It has been proven, then, that dinosaurs do literally every fucking last thing better than us.

And there is no way to top this except for ideas that, frankly, I no longer can call ridiculous. What I want to do now is list the absolute most outrageous awesome dinosaurs I can think of, so that in the next couple years when we find all of them and nobody thinks they are special anymore, I can point back to this as a record of the time when Kingugidorasaurus wasn't quite the household name it will be in 2012:

1. a very large, argentavis or so sized flying tyrannosauroid
2. a coelophysid from the neogene period with maple leaf-shaped dorsal spines and a radiovorous diet, possibly still extant, which will spark the hunt for the newest cryptid
3. a two or three headed dinosaur, prefferably a carnivorous sauropodomorph, and while I'm mentioning it,
4. a carnivorous neosauropod
5. a quadrapedal theropod
6. a six limbed flying, firebreathing dragon (only counts if it's a dinosaur)
7. the remains of a troodontid civilization
8. lagerstatten impressions of the pennaceous flight feathers of a brachiosaurus
9. partially mentioned, but any theropod with a beam or projectile weapon (we already have a venomous one)
10. a SIX winged raptor
11. a raptor with SIX killing claws

and this last one is my favorite:

11. a raptor with ONE HUNDRED killing claws.

It should go without saying that Balaur is my new favorite dinosaur. It replaced Sagittarius, who held that title for some years or so. Secs are my second favorite, so it's all cool. I mean, it's REALLY hard to beat a dinosaur that kills by stomping on the head of it's prey with it's stiletto heel, but four fucking killing claws does that job and then some.