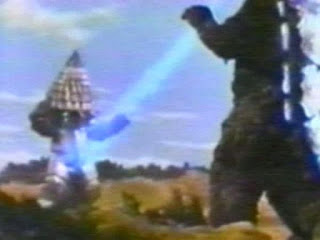 From what I've read on the IDW forums, apparently IDW now has something like 20 additional kaiju added to their roster of licensed character. With the previous 13, that makes 33. I say "something like" because it didn't sound like an affirmative "yes we have exactly 33 monsters," it sounded more like "yeah, whatever, I guess, it's not like it's important."

But 33 monsters is interesting because, throughout Godzilla's screen life there have been (give or take depending on what you count as a separate monster) 50 kaiju. Now, that's monsters that share the screen with Godzilla specifically, meaning I'm not counting Dogora, Matango, Dogora, Sanda, Dogora, Gaira, Dogora, Maguma, Dogora, or any other kaiju that didn't specifically co-star with Godzilla. It also excludes MOST of the Zone Fighter monsters, because Godzilla was only in 4 episodes.

So far, the only confirmed additions are Jet Jaguar, Sanda, and Gaira. So two of those are more correctly Frankenstein monsters, and this widens up the scope to include, potentially, any Toho kaiju.

Any Toho kaiju that requires you to license to use, and that they can legally license to another company. License. When I say "50," it's not a legal list, so there's some uncertain areas. But, overall, I think we are at a position where we can logically break down the total Toho stable and infer which creatures they have.

The real reason I'm doing this is because Prometheus looks really boring what with the "I'm really pretentious about monster movies but I want you to take my humanoid aliens seriously" nonsense and lack of it coming out fast enough (sure they ruined the space jockies, but there's going to be a NEW Giger-esque monster! It's gonna be so cool, trust me). Since Godzilla #1 came out (that is a fucking awful title, by the way, give it a subtitle, please) I've made the conscious decision to head back to the franchise that is still fun and awesome.

So that's 27 with 13 unconfirmed but assumed. Adding Sanda and Gaira makes it 29 and leaves room for four more Toho kaiju that haven't already co-starred with Godzilla in the films.  My votes go to Dogora, Gezora, Death Ghidorah, and Bagan.

This is complicated by a couple things. For one, outside of the rigidly controlled Godzilla series, Toho doesn't really seem to be too concerned about trademarking certain things. Is Maguma a thing they have to specifically license? I don't think that would happen if it were, but still, do I need to count that? Or can IDW draw a giant walrus, not name it, and still come out on top? What about Matango? That monster belongs to William Hope Hodgson, but is in public domain, but also we're talking specifically about the film Matango. Is that a license-able Toho kaiju? Can't they just make a mushroom monster if they want too? The same motif appears in Yog-Sothery over and over and in truth, "Voice in the Night" is Yog-Sothery as well. And you don't need to license Yog-Sothoth from anyone. Lovecraft is dead (the racist bastard).

Bagan is totes a thing, but would they go there? My list suggests a position open for that very thing, but I don't know, this is just deduction. Maybe IDW picked up Gabara and Minilla and that dream is dead now. What about the post-showa non-Godzilla monsters? Mothra series characters are fair game, I would assume, but what about the Jupiter Ghosts? The Dragon from Princess from the Moon? Monsters from the Choseishin shows? Any of the Zilla cartoon enemies? Or, for that matter, Godzooky? What is and isn't fair game?

I have no clue. But, just to review, here is my guess as to the identity of the unknown 17 additional Toho kaiju IDW can now legally use (the bold is for emphasis, bitch):

With such a large cast now, I can bet you two things: They won't ask for anything else monster-wise, and they won't bother trying to come up with a new monster. I think it would be cool to have competent artists design a new monster, but, eh, no big loss.

But seriously guys, when the fuck are you going to do Godzilla X Trypticon. You realize there is an obligation to do this, right? It ain't like Dark Horse, they had an excuse, xenomorphs are tiny little buggers, Trypticon is perfectly city-sized... despite a city being his alt-mode (hahaha scale in transformers is completely ridiculous).
Posted by Princess Malyssa at 05:39