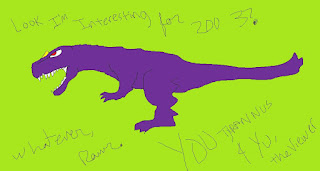 Sorry, I couldn't bring myself to just use one of the same two pictures floating around. So here's the big purple tyrannosaur.
I was watching this SNL episode the other day when update came on, and Seth Myers said something about the "largest feathered animal" next to a picture of what looked like an orange Dilong. I was like "neat, another feathered tyrannosaur. THAT'S interesting enough to make weekend update." I don't remember the joke either, because it wasn't very good, or because drunk uncle was so good the rest of update seemed like a waste of time by comparison.

Just today, I got the urge to look it up (which made me remember how pissy I get when a new extinct dinosaur makes the news and everyone describes it in what I like to call "retard language," and conveniently forget that the animal actually has a fucking NAME), and it took a while for it to register, but I'm now realizing that, at something like 9 meters long, this MIGHT actually be a big deal. I think.

Let me take you back in time, back before Tianyulong. The world was a very different place. People lived in sin and shunned the sun, dangerous mutants roamed the land in droves and science was no more sophisticated than banging two sticks together. These were truly the dark ages, when it wasn't immediately apparent that Ornithischian "quills" and Theropod feathers had a common source.

Back then, people still ran around like a chicken with its head cut off every time they found feather impressions in the extremely detailed Chinese rocks that I believe have to do with lakes and mud or something... well, I'm not an armchair geologist, you know.

Anwyas, so Dyzio is regarded as some bullshit about... I don't even remember, it's bullshit, though. "Feathered dinosaurs" isn't redundant yet, and generally the only dinosaurs that people admit to having feathers are the ones from China with impressions of them, because I guess logic is optional in cases like these. And I'm talking about the time when feathers weren't just limited in known specimens, but obviously in range. Maybe this will be a surprise to some of you, but maniraptorans are MOST dinosaurs by an overwhelming majority. The fact that all the little tropical feathered specimens from Cretaceous China happen to be... except for maybe one or two (and remember we're in a time machine, so they haven't found Guanlong yet) all maniraptorans shouldn't surprise anyone. Most folks interpreted this to mean only Coelurosaurs have ever had any kind of feathers (we knew about pycnofibres, but, again, the world before Tianyulong was a scary, dark place where nightmares live).

On top of that, all of the feathered dinosaurs at this point weren't very big. Maybe like 2 meters long for some of the raptors, but that's it. Because of this kind of attitude where, instead of interpreting this information to mean that a lot of different lineages of dinosaurs had feathers, they interpret whatever specific dinosaurs they find with feather impressions on to have feathers, and every thing else to be some sort of Jurassic Park-mutant-chupacabra-abomination-from-hell. Naturally. It was around this time I became aware that, aside from the more logical "we haven't found feathers on a carnosaur (remember, Dyzio doesn't count for contrived reasons), so only dinosaurs from the base of the earliest fuzzy one should have feathers (coelurosaurs)" there was what I like to call the "Elephant Rule."

See, in our post-Tianyulong age of enlightenment with free podphones for everyone where you can download your mother over a D6 FTL ADSFASDFGADF connection, it seems obvious that, in an environment where mostly the smaller, more delicate animals survived and/or attract attention, clearly that doesn't mean that ONLY animals of a certain size have feathers. But back then, there was this idea that, like Elephants aren't particularly hairy animals, feathers have a purpose in heat regulation, and above a certain size they aren't really necessary. Fair enough. Only, mammals aren't dinosaurs. It sort of makes sense, but a Loxodonta is only like 2 meters tall, maybe 3, and there are living dinosaurs that big that are covered in all kinds of feathers. Still, the notion that there is a size threshold where feathers stop serving any purpose and perhaps risk the danger of overheating has been something a lot of folks are expected to assume for the good of the country.

You might be able to tell that I never really liked that idea. Fast forward to our utopian post-Tianyulong society with hive-minds and floatr and mammoth-cloning and here I am looking for why no one has come forward about feathered sauropods. Logic dictates the earliest sauropodomorphs, at the very least, MUST have had some sort of hollow integument roughly analogous to pycnofibres, proto-feathers, and ornithischian quills. But alas, where are the fuzzy Panphagias? Even I sort of have to admit, as an endotherm myself, that at a certain point being fuzzy is a death sentence, especially in the Cretaceous, but what IS the limit? The sky? If you ask me, that's kinda too lame, but I suppose a fuzzy Amphicoelias MIGHT be a little out-there.

But then comes along Yutyrannus, at 9 meters long, which is the biggest fuck you to the elephant rule I've ever seen. Motherfucker isn't even "just some quills on the arm" ala Concavenator, he's straight up a giant Dilong.

So the only trend I can see here is that Ornithischian quills don't really follow the same rules as straight-up Theropod feathers. Other than that, it seems weird that a 9 meter long tyrannosaur is completely fuzzy while the 6 meter long Concavenator "only" has arm quills. In fact, I don't believe that in the slightest. Doesn't it make more sense to say that all they saw of an integument where the scaled belly and feet, and the quill nobs, and then took a exclusionary attitude and said that's all there is, rather than using deductive reasoning and saying "hey, carnosaurs had feathers too... maybe we should check out Dyzio again."

Meanwhile, a chinese tyrannosaur turns up, and nobody questions it... double standard, or hypocritical? You decide.

Anwyas, the point here was to just look at the "elephant rule" and what evidence there is to support it that I know of. So far, what we know about endotherms (me included) says that at some point a heavy coat is going to boil you alive, and that dinosaurs aren't mammals, so we can't expect it to work exactly the same, and so far we have not found a definitive limit for theropods, although it seems like Triceratops really is the elephant rule for ornithischians. That said, I don't REALLY expect advanced thyreophorans under 9 meters long to be particularly fuzzy, but you get the idea.

Feathers: I could have told you this stuff years ago.

Next up: Did Amphicoelias have advanced flight feathers? Inquiring minds want to know!
Posted by Princess Malyssa at 11:44