Once again we have very few pictures of, you know, Godzilla, and most of it is neo stuff. King Kong, Jiras, Manda, Godzuki, Gorosaurus, Anguirus, and and and... 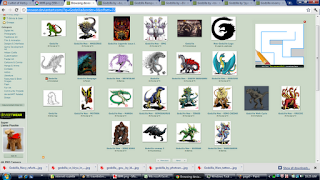 Automatic 20. Unless somepony ships Godzilla with Zilla on the next page, we've already won.

http://bayanghitam.deviantart.com/art/Godzilla-106577074?q=boost%3Apopular%20Godzilla&qo=76 Unless this is supposed to be one of those monsters from The Fairy and the Devil, I'm not sure what the hell this is even supposed to be. It's certainly not Godzilla... which is what it's named. So... I don't understand this at all. 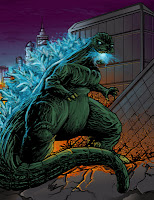 http://banenacent.deviantart.com/art/Godzilla-Rampage-10633217?q=boost%3Apopular%20Godzilla&qo=79 oooooh... so close. Maybe if you were such a big fan, you'd have, I don't know, WATCHED one of the damn movies? Yeah, Godzilla is grey. Try again. 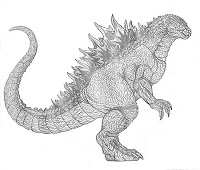 http://tavaresg.deviantart.com/art/Godzilla-159932202?q=boost%3Apopular%20Godzilla&qo=78 I kinda want to give this a point... but it looks waaaay too constipated for me to feel comfortable with. Plus, we're done next page anyways, so it doesn't even matter. 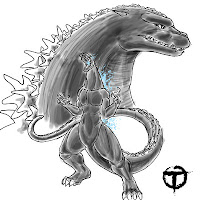 http://art-minion-andrew0.deviantart.com/art/Godzilla-revamp-2-77328317?q=boost%3Apopular%20Godzilla&qo=93 WHAT?! Why is he a fucking zombie?! Let's listen to some creator commentary, shall we?

"Was asked to do a re-design concept of Godzilla for some folks who wanna make a short series of movies.
I was supposed to make him look seriously evil, and I think it turned out pretty well. ^_^"

Okay, so... "some folks" are going to do a short series of movies. Sounds like a couple of fans want to make some fan films, then? Okay, well, fan films don't usually have much of a budget, and so complete projects in the kaiju world are pretty rare, and when they do pop up, they are either unwatchable, over the top, or both. If he requires a "re-design," I'm guessing this is one of the over-the-top ones.

You can tell that these people won't ever finish their "series." In three years, we should have heard something by now. Also, judging by the notion that he's supposed to make Godzilla look "seriously evil," I'm guessing these people are all 11 years old.

And the Page 4 total brings us to 86. Even just a crossover would spoil our perfect run, so let's look at page 5: 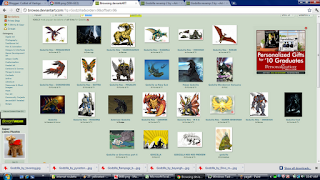 There are only six pictures of Godzilla on this page. The rest are of Megaguiras, Vagnosaurus, Dagarlah, Hedorah, Rodan, Ookondoru, Battra, Megalon, Zilla, Moguera, Ganime, Mecha-King Ghidorah, and on and on.

Of those, only three are really +1 worthy. So that gives us 23 points and a grand total of 109, which means we have won the game in only 5 pages. I dare you to do it faster.

What IS notable is that how this little exercise has exposed how batshit insane the Zilla fandom is. Not only have we been coming across various pieces titled "Godzilla" that have only Zilla in them, but they also showed us, on our last page, exactly what the comic this is a response to was talking about: 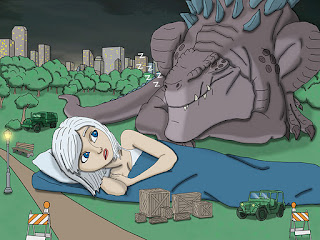 Here we have Zilla sleeping next to a gigantic human female, which I'm sure is exactly the kind of sexual fetish that fuels the creepier stuff on dA, who ALSO happens to be from some other pre-existing series, although I'm not going to go out of my way to find out what.

Even if we counted this because it is a part of the greater Tohoverse, it would still be cancelled out by all the GOOD art of GOOD Toho monsters.

aaaaaand that concludes my first lp! Yay!
Posted by Princess Malyssa at 10:58