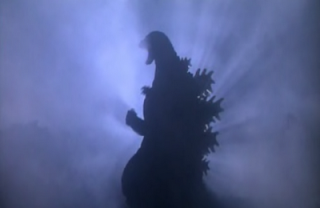 If you aren't like me, and don't have this image burned into your skull like you were attacked by a psychic photography whistling a catchy tune, then please feel free to use this image as refence material. It's very, very, important.
So I just typed in "godzilla continuity" on Google and part 3 of these things i'm writing popped up. So, to anyone who cares to search for those things, it is now visible to the public. That made me think about maybe finishing it.
To start, I wanna talk about the late showa stuff. I mean the Marvel and Hanna-Barbera Godzilla series. Both of these work on a similar principal as the Toho movies of the late 1950's and 1960's. The difference is that they could only afford to use Godzilla, but the idea is still that you're just supposed to know who he is and where he's been and who he's fought up to this point. Unlike the Dark Horse series, which has an explicit and tight timeline, the Marvel and HB Godzillas work with the assumption that after Godzilla did all that other stuff, now he's doing this stuff.
Now, for Hanna-Barbera's cartoon this isn't a problem. We could assume Scooby-Doo was a part of the timeline, but this isn't necessary. But Marvel not only took the Toho approach to it's own properties, it actively used its stable of superheros as something for Godzilla to chew on.
But that's cool too. Other than his ridiculous appearance and his stupid habit of eating tress (have you ever seen a Falcon eat grass? Yeah, me neither), this Godzilla is portrayed as the same mood-swinging bad ass from the rest of the showa series, so not only do all the characters assume the reader is familiar with his history (its only mention involves something about him fighting alot of monsters from the late 1950's until now), it is consistent in Godzilla's characterization. It's even consistent between universes: Thor, while trying to push a building against Godzilla so he wont knock it down, compares the monster's strength to the Midgard Serpent... which is pretty accurate. He also wipes with floor with every superhero he meets.
It makes me really wish they would have done a crossover with Conan and some Great Old Ones. I'd like to see Godzilla rip that smug asshole (and that's by GOO standards, by the way) Shuma-Gorath a new... asshole.
The cartoon treats Godzilla like a bad ass, and he is to the "I have to lose and then win against every obsurd ultra monster they roll out each week, but in the end I manage to wrap everything up so there really shouldn't be any suspense at all, and there isn't" degree, but he much more like he was in Zone Fighter and Megalon than the rest of the films or Marvel's Godzilla series.

Where does it fit in? The years they were made, with one episode of each taking place in the distant past. (Psst! Hey, listen to this: Godzilla fights a cross between a Brontosaurus and an Amphicoelias in the Time Dragon episode! It's a carnivore like the old school Bronto, but it longer than Godzilla! Isn't that forking awesome!)

The only thing is they don't directly influence the timeline of the films, so really the films are part of the Marvel/Hanna-Barbera timeline, but not the other way around. Make sense? Good, moving on.

HEISEI SERIES: Forget everything you know, because we're starting over. From the showa series, we are only taking the first film. Because this happens quite alot from now on, I'm going to refer to it as the "Shodai Series," which consists of two total films and they occur in every conituity... well, as a group they do, but the events are the keystone with which the Godzilla Multiverse pivots. More on this later.

Whoops it's three, not two.

So in 1984 we find another Godzilla and his mutant Shokilas buddies, and it isn't made clear in the film if this Godzilla is the second one or not. In the U.S. cut Steve Martin says "excuuuuuse me! We never found his body! It is the same Godzilla, and all I need is this thermas!" while he was wearing one of those hilarious arrow-through-the-head hats. Turns out he was wrong. Dead wrong.

G84 also has an awesome moment where this one lone professor gets with the damn times and makes the logical connection that, since Godzilla is a theropod, and all living theropods have magnetoception, Godzilla must have magnetoception. He is right, and that puts the origin at the very base of the group, meaning in the Godzilla universe, it is even possible for Herrerasaurus to sense magnetic fields. I don't think this is how it plays out in the real world, but I also don't know for sure.

Godzilla vs. Biollante is the greatest film of all time. Period. At the end, Godzilla slinks away into the ocean, heading into the colder waters up north to slow down his infection. Biollante returns to the sky as a giant forking Rose. It's fantastic. Stop what you're doing and go watch it right now.

GvsKG confuses people who watch the dubbed version, as well as people who can't figure out that you can't remember something if it never existed. I don't feel like addressing the confusion this has caused, because all the confusion is based on ingorance to begin with, so once you pay attention to what's happening in the movie, you shouldn't have a problem.

The influence on the timeline is that we find out once and for all the origin of the Godzilla in 1984, as well as the the exact event that makes the Showa and Heisei timelines different in the first place. We also get a handful of possible futures, so there's a whole parachronic knot that gets elaborated on. Far from being confusing, GvsKG actually sets everything straight once and for all.

In 1944, the second Godzilla on Lagos that would have been mutated and fighting Anguirus in Osaka by 1955 is teleported by time travelers into the Bering Sea. Because of this, there is a 24 year gap between the creation of the first two Godzilla's. This is where the worlds divide. In the late 1970's (I'm putting 1978 on it for obvious reasons) a nuclear sub sinks in the Bering Sea, creating the fully grown Godzilla II, who, like he did in the Showa timeline, doesn't stumble into the Japanese mainland until much later. However, there is still at least one other monster created in the Castle Bravo test: King Ghidorah. Naming conventions are for another entry.

In 1992 we have the events of three movies unfold. In GvsKG, the Futurians announce something they already did (wrap your head around that), send KG into action (a mutant designer pet, he never acted until he was told to), who is killed by Godzilla after being blown up to 100m (get this: they thought he was still a Godzillasaurus... even though they remembered him. Isn't that just wacky?). Mecha-King Ghidorah arrives from the future (Emi says that you can't have the same person twice at the same time... but KG's body is still down in the water, you know) and drops Godzilla in the ocean. MKG bites it hard. Later, a meteorite wakes up Godzilla and Battra (aka the second Mothra, save that for later), and Mothra has to deal with both of them. Battra and Mothra team up to drop Godzilla in the ocean again, and Battra bites it hard. Mothra goes into space to destroy another, more dangerous planet headed for Earth that Battra was going to destroy. She makes it back by 1996. All the while, the U.N.G.C.C. has been building both a replacement for the Super X-2 called Garuda and a new mecha called Mechagodzilla from the remains of MKG. Rodan is found on Adonoa Island, a result of nuclear waste rather than testing, alongside an egg laid by the now nest-parasite Godzillasaurus (given the situation, it was probably the only choice. Godzilla's cousin died soon after the egg was laid, so having Rodan defend it was the only way to ensure the survival of the species). The egg hatches, and both Godzilla AND Rodan come after Baby Godzilla, both being near death by using Baby as a lure to bring them into MG's sights. Rodan gives his "monster energy" to Godzilla, and he spiral beams the shit out of MG. Godzilla 2 and 3 return to the sea.

Mothra, on her way out of Earth's orbit, drags the remains of Biollante with her like collecting pollen. She pollenates a black hole, and two years later Space Godzilla emerges. SG comes to Earth and meets Godzilla and Junior, wins, flies to Fukuoka, kills Moguera repeatedly, and bites it hard after Godzilla spiral beams the shit out of him.

Another two years later, Birth Island, Godzilla and Junior's temporary hom EXPLODES! It's completely gone. Junior and Godzilla are wandering in two different directions with Miki trying to reunite them while everyone is scared to death over what it means that Godzilla is glowing so red. Turns out he's going to meltdown and take the whole planet with him. The only thing that can stop him, the Oxygen Destroyer, conveniently reappears as a mutant arthropod who is apparently so deeply branching it's last known ancestor in the fossil record comes from the Vendian. So, a giant oxygen destroying Parvancorina monster. Or something.

But it doesn't work. Destroyah dies anyways (cause you can't BEAT Godzilla!), although it seems to have killed Junior, and despite every effort to cool the monster's hot heart with a warm island song...

I mean melt his icy heart with a tropical song...
Er, freeze his over-heated radioactive heat with super-freezing mazer tanks and the Super X-3, he melts down. Better than exploding, but still kiss your asses goodbye.

But wait a minute... why are we all still alive? Oh shit, the radiation is actually dissapearing?! What the fork is going on?

It's Junior. Junior has officially become the third Godzilla, something that Minya never accomplished, because Minya sucks and Junior roxz!

Next time, we will find out what Junior does as a full grown adult Godzilla... it involves the real Ghidorah, so stay tuned.
Posted by Princess Malyssa at 19:00