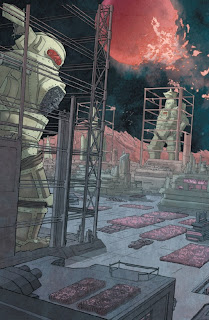 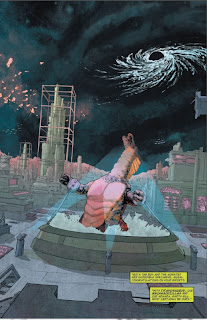 This should be purty easy and quick.

1954: Godzilla
1955: Godzilla Raids Again
1956: Rodan
1961: Mothra
1964: Godzilla vs. Mothra and Ghidorah the Three Headed Monster
1967: It is possible some iteration of Son of Godzilla without the titular character happened here, but I'm waiting until Kumonga's spotlight issue to be sure.
1971: Again, It's possible Godzilla vs. Hedorah happened in some capacity but without the superhero Godzilla, but I'll wait until Hedorah's issue to say anything.
1972: Godzilla vs. Gigan but with the following exceptions
- Anguirus attempted to take down Gigan AND King Ghidorah by himself and was rendered unconscious
- Godzilla arrived seperately, and probably never interacted with Anguirus, but beat both monsters on his own
1978/1979: Godzilla sinks a Russian nuclear sub and grows from 50 to 80 meters.
1984: Return of Godzilla with the obvious exception that Godzilla has been previously seen many times between 1954 and now. Miki's parents are killed in this rampage.
1989: Godzilla vs. Biollante more than likely happened, but this time around Miki actually WINS her fight with Godzilla, gains notoriety in the U.N.G.C.C., and begins a successful ESPer institute in Japan.
1991: The Return of King Ghidorah (2nd ver.) wherein the real King Ghidorah comes back from space to harass Earth once more, but is defeated by Godzilla after sinking Shindo's secret nuclear sub, bring Godzilla and King Ghidorah roughly the same size as each other.
1992: Possibly the first time Battra appears.
1993: Godzilla vs. Mechagodzilla II with exceptions in that Baby Godzilla is never born, It's the surviving 1956 who appears and not the Adonoa one, who becomes mutated and enlarges to near-Godzilla size in the same way. Super Mechagodzilla is not completely destroyed, but there is something that happens that causes his further use to be taboo.
1995: Destroyah forms the same way as his original appearance. Godzilla doesn't die, and Junior isn't even there. Godzilla kills or nearly kills Destroyah, who either escapes or there is a second one later.
1999: Surviving monsters begin to live in the Ogasawara Islands, causing the place to be dubbed "Monster Island." Residents include Godzilla, Mothra (the adult surviving twin from 1964), Anguirus, Rodan (the surviving one from 1956), Kumonga, Battra, and King Ghidorah, who is amazingly more mellow these days.
2004-2010:  The events of Godzilla Legends #3 pan out, Titanosaurus goes to live on Monster Island in the aftermath.
2010: Rodan's egg is found. From Godzilla Legends #2.
2011: Godzilla: Gangsters and Goliaths and Godzilla Legends #1
2012: Godzilla Legends #2

In a nutshell, that's what it looks like right now. Of course, as the last two issues of Legends have yet to come out, and IDW will surely add to this in other miniseries, hopefully including the conclusion of the stories seen in Godzilla Legends #1 and of course #3, I will either edit this entry or make a new one... depends on how I feel.
Posted by Princess Malyssa at 11:59